Plugins have gradually found their way into the mastering engineer’s workflow. While hardware equalizers, compressors, exciters, high end converters and even analog tape remain tools within the ME’s arsenal, software has improved greatly over the decades. Mastering completely in the box can still render professional results.

This isn’t to say that one can claim to be a mastering engineer after simply purchasing a few plugin packs. There are still many skills mastering engineers possess that go beyond processing a stereo mix to sound fuller, clearer and louder. Throughout history, MEs have adapted to changes in technology, delivering music optimized for vinyl, 8-track, cassette, CD and now streaming. With Apple’s spatial audio option available as part of their music streaming service, MEs will continue to tweak their processes to create masters optimized for an ever-evolving and complex listening format.

That said, there are a plethora of tools currently available if your primary goal is to simply enhance the sonics of your recordings before uploading for streaming and/or distributing via compact disc, vinyl, etc. These plugins can be used to sculpt the timbre and dynamics of your music to professional standards.

Here are my favorite mastering plugins of all time, and how I’ve used them when finalizing mixes for distribution.

Originally designed to enhance the sound quality of .mp3 files, Ozone debuted in 2001 and was made for use within DirectX or Winamp. Sensing a need for mastering-grade tools that would function within a DAW, iZotope soon updated Ozone to include multiband dynamics, metering tools and some robust presets that helped new users adjust to this new kind of mastering workflow.

During the loudness wars in the mid-2000s, iZotope incorporated multiple IRC modes into the maximizer, allowing mastering engineers to tailor Ozone to the program material. This allowed for more transparent masters, even at loud volumes. Ozone 8 adopted one of my favorite tools, the tonal balance control, which provides incredibly helpful visual feedback. It also introduced the spectral shaper, which allows MEs to find and fix problem frequencies.

Lastly, released in 2019, Ozone 9 features an updated Master Assistant feature, which provides an informed starting point for your masters based on a reference or other user-defined parameters. Master Rebalance allows you to fix mix balance issues without access to the original stems, and the Low End Focus feature defines your low end with minimal work.

As you can see, Ozone has improved with every single iteration, and I find myself using it more often than not when using a strictly digital mastering workflow. From tonal sculpting, to stereo imaging, to adding analog-style harmonic coloration and even for final limiting duties, Ozone is what it claims to be: an all-in-one mastering solution.

While I’m on the topic of iZotope, I need to mention two more of their tools that see regular use when mastering. Insight 2, the intelligent metering plugin that features modules for loudness, levels, sound field and spectrogram, has become an essential tool for providing visual feedback about my masters. I use Insight 2 to measure short term, integrated and momentary loudness, as well as to diagnose mono phase compatibility issues.

Additionally, while more commonly used for post production-related tasks, iZotope RX 9 sees regular use for de-noising, de-clipping, to remove mouth clicks and occasionally for its music rebalance feature, which allows users to bring up or down the levels of drums, vocals, bass and other elements. That being said, I’d generally rather have clients re-deliver mixes with updated balances than ever use software like this for the task.

iZotope continues to push technological boundaries, developing software that helps music makers regardless of which stage they’re at, whether it be production, mixing or mastering.

It certainly wasn’t the first digital limiter plugin, but in my opinion, FabFilter’s is the best. Brickwall limiting is a necessary part of mastering, and Pro-L 2 is a limiter densely packed with handy features, yet still so simple to use.

Improving on the original Pro-L, the updated Pro-L 2 features seven distinct algorithms (transparent, punchy, dynamic, allround, aggressive, modern, bus and safe) that handle program material slightly differently, allowing users to meticulously tailor this limiter to the dynamics of their material. It can be pushed to achieve competitively loud results while still remaining transparent and retaining the integrity of the mix, making it my go-to final limiter when mastering.

Sonics aside, the tidy FabFilter Pro-L 2 user interface features true peak level meters and loudness metering with support for the EBU R128, ITU-R BS.1770-4 and ATSC A/85 standards. Its real-time level display provides the necessary information you need to deliver quality masters in adherence with the needs of your client. As spatial audio becomes more prevalent, the fact that Pro-L 2 supports Dolby Atmos 7.0.2 and 7.1.2 formats makes it hard to argue against FabFilter’s limiter as the best on the market. 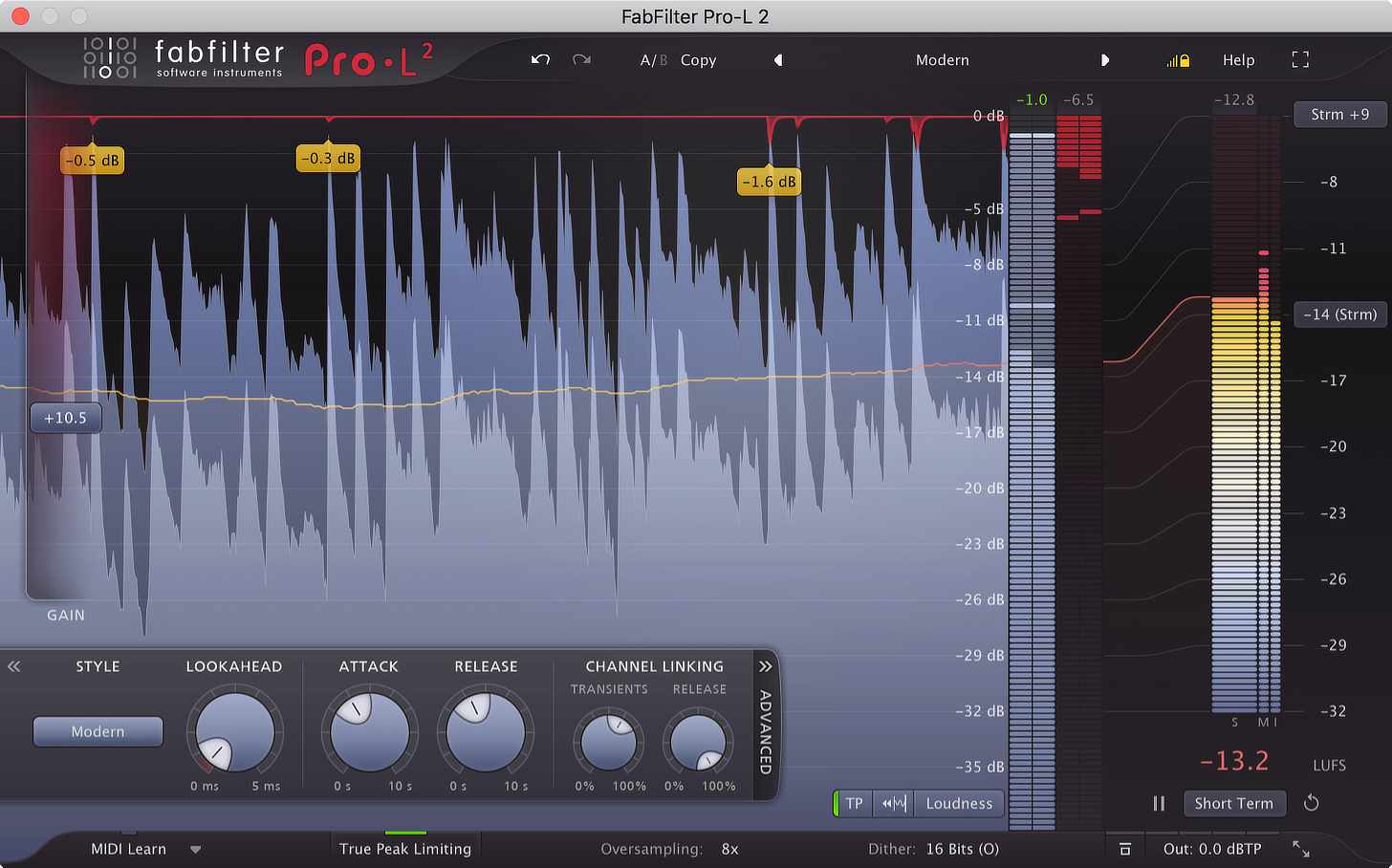 Based on the monstrous tube-filled hardware unit that currently sells for over $6,200, this emulation from Universal Audio has found its way onto my masters for nearly a decade now. The Massive Passive is what I would call a “musical” equalizer, almost always bringing out the best of the program material. The low end has mojo, the midrange introduces bite without becoming harsh and the high end is silky and clear.

Despite its complex-looking faceplate, the dual four-band Massive Passive covers all the sonic territory required for even the most demanding mastering jobs. It’s cable of both broad stroke sweetening (all the way up to 27 kHz) and precise EQ duties thanks to its 11 selectable frequencies per band. The low and high-pass filters are transparent, and you can unlink the two channels in case there are frequency-based discrepancies between the two channels.

Chino, California-based Manley Labs, makers of some of the very finest tube-based audio hardware, officially licensed and endorsed this plugin, so you can be rest assured that it can be used to elegantly sculpt your tones when mastering.

Pro-Q 3 approaches the process of equalization with the very same sonic transparency and precision as the other FabFilter plugins, which I can’t recommend enough for both music and post-production duties. While the Pro-Q 3 doesn’t sound as sweet and vibey as something like the Massive Passive, it more than makes up for it with accuracy and versatility.

In practice, I’ll employ the dynamic EQ mode on Pro-Q 3 for subtly taming harshness in vocals, cymbals and guitars, as well as for cleaning up excessive boxiness or boominess lower in the frequency spectrum. I’ll also take advantage of the mid-side capabilities to sculpt a clearer stereo image. 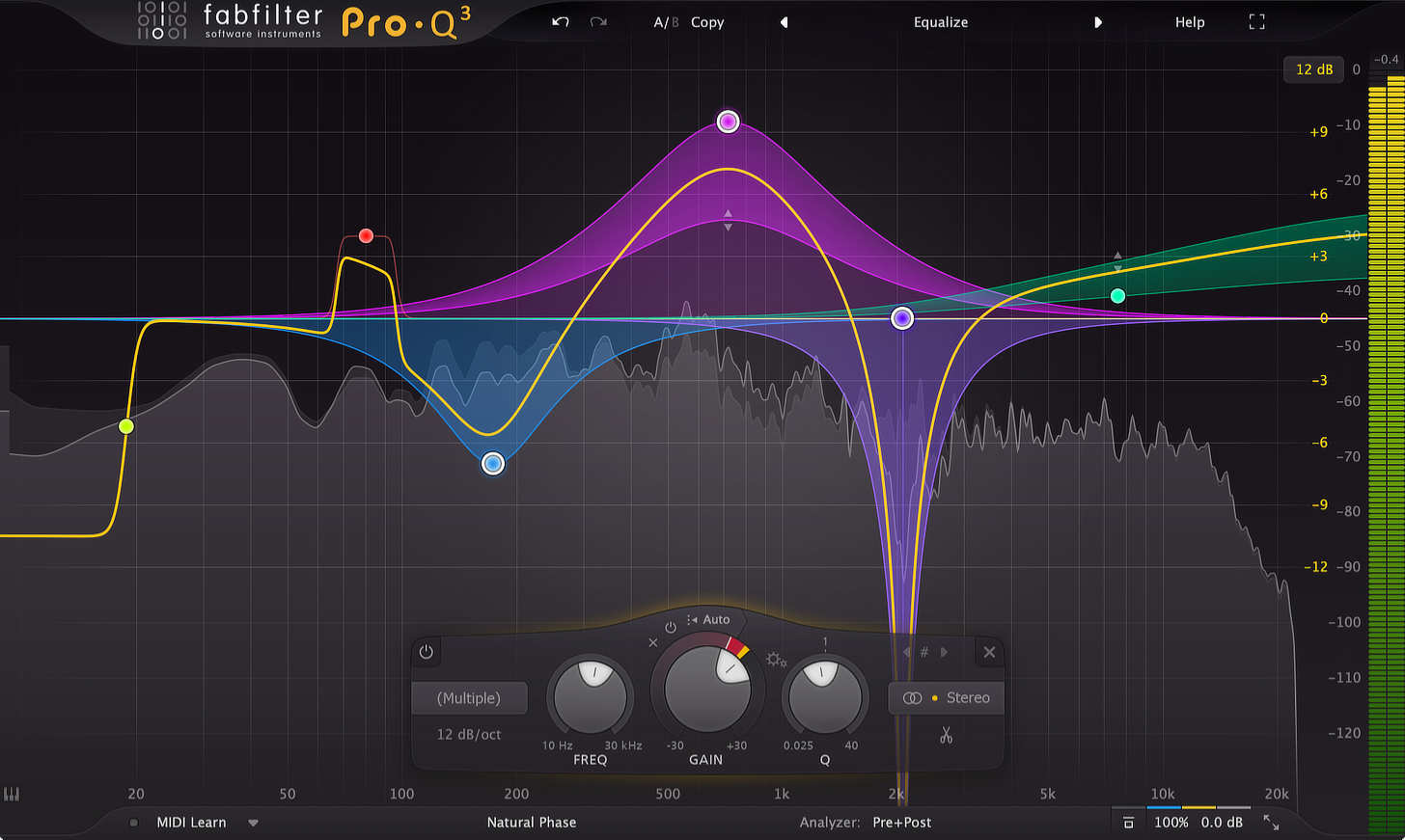 As a long time user of the UAD/Brainworx Shadow Hills Mastering Compressor, I was thrilled to see this update, which is available through Plugin Alliance. The calling card of the SHMC is separate optical and discrete compression sections for two-stage compression techniques.

Vintage King released the Class A hardware in 2012, limiting production to only 50 units.

The VCA section is punchier on the Class A. Brainworx added even more features to the emulation of the already widely celebrated hardware version. Dubbed the “red” version, this updated compressor is punchier, faster and more versatile than its “green” predecessor.

All things considered, the SHMC Class A is the most versatile plugin compressor on the market, capable of virtually everything from the subtle taming of dynamics, to expressive and colorful enhancement of punch and timbre. 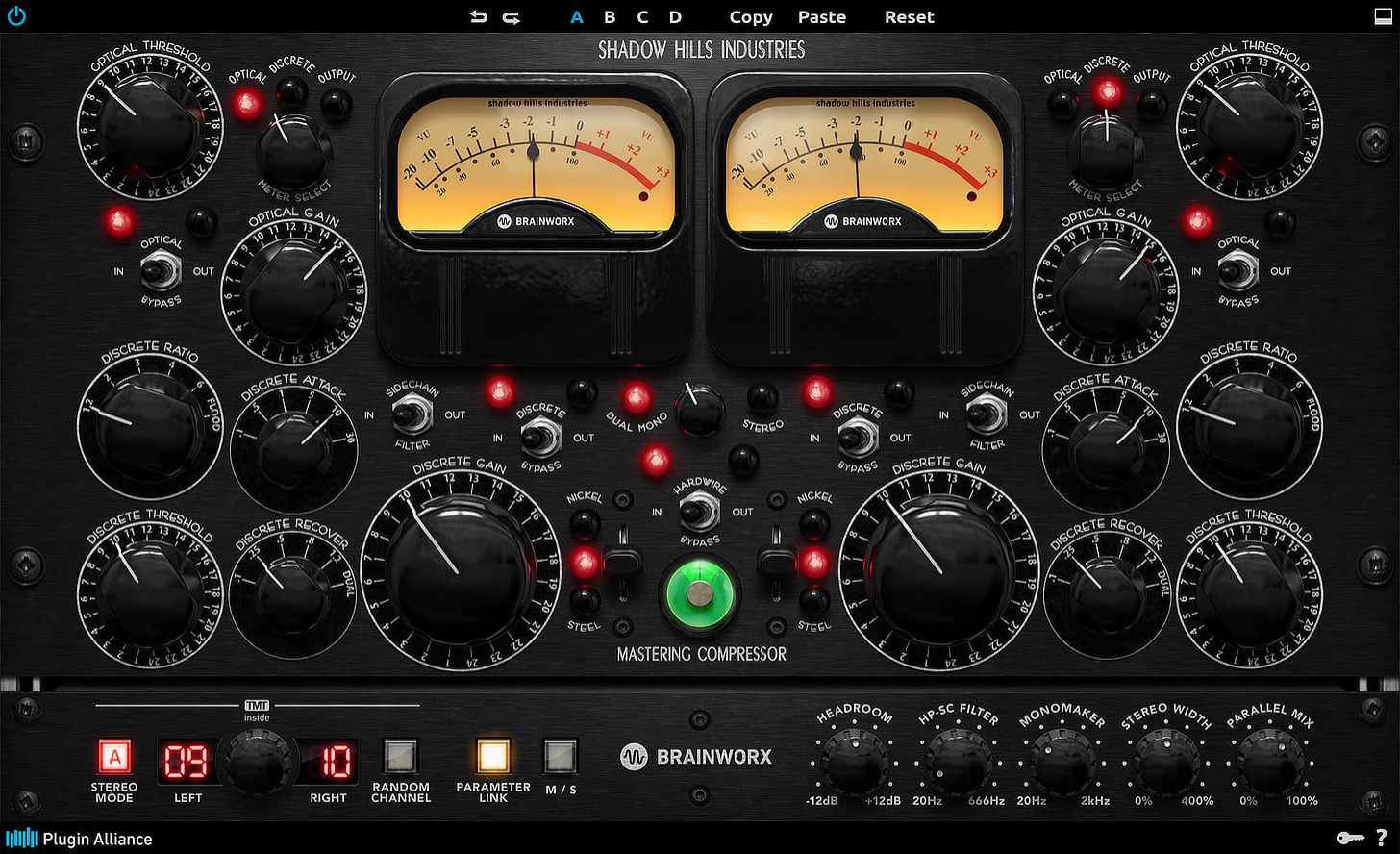 As important as the aforementioned plugins are to my mastering process, none of them can handle certain tasks that this specialized mastering DAW and plugin set from HOFA can. CD-Burn.DDP.Master PRO can:

In addition to the aforementioned features, CD-Burn.DDP.Master PRO comes with an impressive collection of plugins including an analyzer, de-esser, EQ, compressor, limiter and reverb.  Mastering goes far beyond simply processing a stereo mix, and I believe this software from HOFA to be a great investment for anyone who is interested in mastering at a professional level. 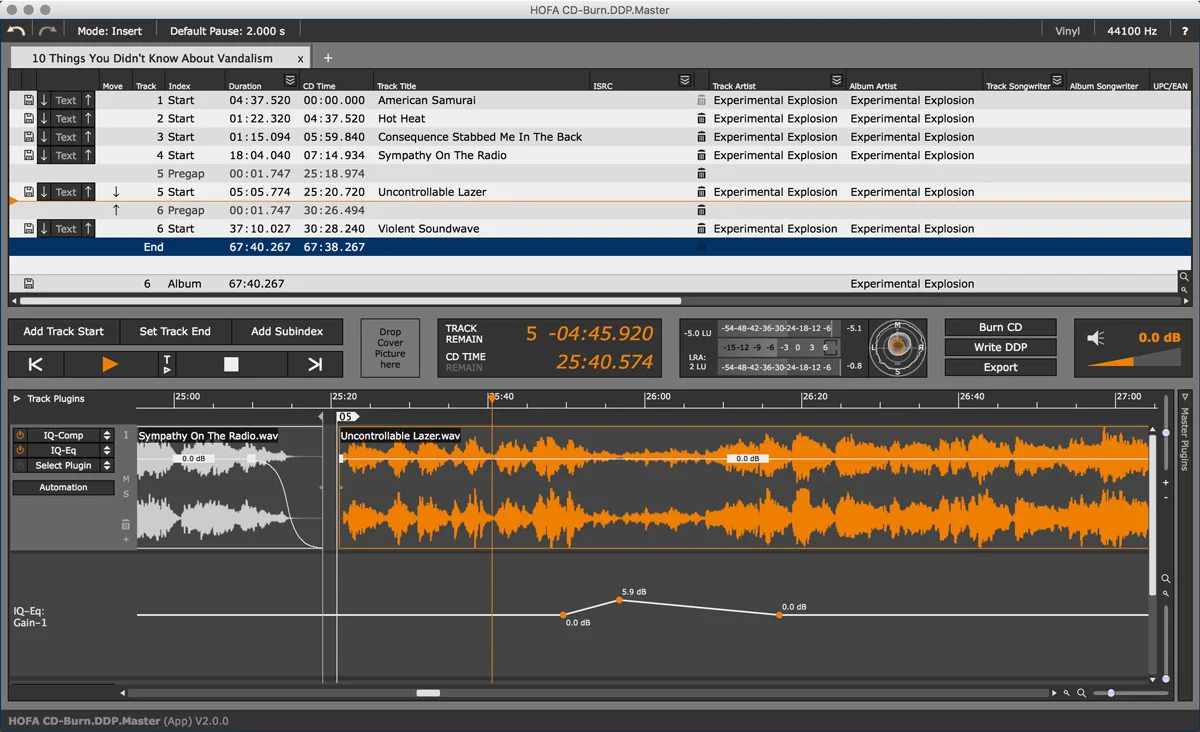 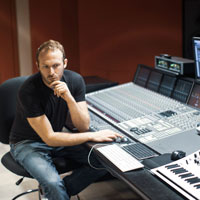 Introducing Petru: “I Describe My Genre As ‘Space Techno'”

Ahead of his performance at Attack Live we ask PETRU to introduce himself. The Corsican native was recently featured in

Nothing has begun teasing a new charging case set to be released alongside their newest wireless earbuds. The Ear Stick

4 Ways to Create Depth in your Mixes WITHOUT Reverb or Delay?!

Could you create depth in your mixes WITHOUT any reverbs, delays and spatial effects? We’ll prove how can you do

THIS LICENSE AGREEMENT is made on Mon, 16 May 2022 02:31:24 -0400 (“Effective Date”) by and between Licensee (hereinafter referred to as the “Licensee”) also, if applicable, professionally known as Licensee, and Producer Name (“Songwriter”). (hereinafter referred to as the “Licensor”). Licensor warrants that it controls the mechanical rights in and to the copyrighted musical work entitled The Beat Title (Contract Preview Only) (“Composition”) as of and prior to the date first written above. The Composition, including the music thereof, was composed by Producer Name (“Songwriter”) managed under the Licensor.

All licenses are non-refundable and non-transferable.

Master Use. The Licensor hereby grants to Licensee a non-exclusive license (this “License) to record vocal synchronization to the Composition partly or in its entirety and substantially in its original form (“Master Recording”)

Mechanical Rights. The Licensor hereby grants to Licensee a non-exclusive license to use Master Recording in the reproduction, duplication, manufacture, and distribution of phonograph records, cassette tapes, compact disk, digital downloads, other miscellaneous audio and digital recordings, and any lifts and versions thereof (collectively, the “Recordings”, and individually, a “Recordings”) worldwide for up to the pressing or selling a total of One Thousand ({DISTIBUTE_COPIES}) copies of such Recordings or any combination of such Recordings, condition upon the payment to the Licensor a sum of Twenty-nine Point Nine dollars ($29.9), receipt of which is confirmed. Additionally licensee shall be permitted to distribute 3 free internet downloads or streams for non-profit and non-commercial use. This license allows up to Ten Thousand (10000) monetized audio streams to YouTube and SoundCloud only.

Performance Rights. The Licensor here by grants to Licensee a non-exclusive license to use the Master Recording in Unlimited non-profit performances, shows, or concerts. Licensee may not receive compensation from performances with this license.

Synchronization Rights. The Licensor hereby grants limited synchronization rights for One (1) music video streamed online (Youtube, Vimeo, etc..) for up to 10000 non-monetized video streams on all total sites. A separate synchronization license will need to be purchased for distribution of video to Television, Film or Video game.

Credit. Licensee must credit the Licensor in the title of any composition when possible with (Prod. by Cxdy). Licensee shall acknowledge the original authorship of the Composition appropriately and reasonably in all media and performance formats under the name “Producer Name” in writing where possible and vocally otherwise.

Consideration. In consideration for the rights granted under this agreement, Licensee shall pay to licensor the sum of $29.9 US dollars and other good and valuable consideration, payable to “Producer Name”, receipt of which is hereby acknowledged. If the Licensee fails to account to the Licensor, timely complete the payments provided for hereunder, or perform its other obligations hereunder, including having insufficient bank balance, the licensor shall have the right to terminate License upon written notice to the Licensee. Such termination shall render the recording, manufacture and/or distribution of Recordings for which monies have not been paid subject to and actionable infringements under applicable law, including, without limitation, the United States Copyright Act, as amended.

Indemnification. Accordingly, Licensee agrees to indemnify and hold Licensor harmless from and against any and all claims, losses, damages, costs, expenses, including, without limitation, reasonable attorney’s fees, arising of or resulting from a claimed breach of any of Licensee’s representations, warranties or agreements hereunder.

Audio Samples. 3rd party sample clearance is the responsibility of the licensee.

Governing Law. This License is governed by and shall be construed under the law of the FL United States of America, without regard to the conflicts of laws principles thereof.

Term. Executed by the Licensor and the Licensee, to be effective as for all purposes as of the Effective Date first mentioned above and shall terminate exactly ten (10) years from this date.